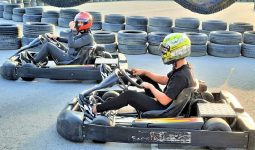 Get an adrenaline rush with this fun karting

Have you ever experience karting? Now you can Go Karting in Bahrain. The Bahrain International Karting Circuit is a world-class karting venue with over ten-track configurations. This fabulous circuit was designed to world-class standards and also it could be capable of hosting world championship events. BIKC is the only existing venue in the world homologated to host international events at night, thanks to its state-of-the-art floodlight facility. Two tracks can be run at the same time due to the various track configurations. The first caters to children aged 7 to 12, while the second caters to teens and adults aged 13 and up. Floodlit for night races at the Bahrain International Circuit in Sakhir.

What is Go Karting?

A go-kart (also spelled go-cart) is a kind of open-wheel car or quadricycle. From motorless go-karts to high-powered racing machines, go-karts come in a variety of styles. On long circuits, some vehicles, such as Superkarts, can outrun race cars or motorcycles.

Go-karts may be allowed for use on public roads, also known as street tracks, in some countries. In the European Union, a go-kart adapted for road use must be equipped with headlights (high/low beam), taillights, a whistle, indicators, and an engine that does not exceed 20 horsepower (15 kW).

Kart racing, also known as karting, is a form of motorsport in which drivers compete in open-wheel, four-wheeled vehicles called go-karts or shifter karts. While some professional kart races are held on full-size motorsport tracks, they are normally raced on scaled-down circuits. Former Formula One champions Sebastian Vettel, Nico Rosberg, Ayrton Senna, Lewis Hamilton, Michael Schumacher, and Fernando Alonso all started out in karting.

Speeds differ greatly among karts, with some (known as super karts) reaching speeds of over 161 kilometers per hour (100 mph), while recreational go-karts for the general public might be restricted to lower speeds.

The Bahrain International Circuit, which opened in 2004, is a motorsport venue that hosts drag racing, the GP2 Series, and the annual Bahrain Grand Prix. The Grand Prix of 2004 was the first to take place in the Middle East. Australian V8 Supercars have competed at the BIC since 2006, with the event branded as the Desert 400.

At the Bahrain International Karting Circuit, you will have a thrilling time. The venue welcomed Bahrain's young drivers to the world of motorsport racing. The state-of-the-art BIKC is designed to meet the highest international standards for international races while still allowing you to enjoy your karting experience.

In addition, the House area and Outdoor Terrace have a panoramic view of the entire course. When visiting the track, you will enjoy coffee, lunch, or dinner on a mix of lounge and dining furniture. The Club House also has many life-timing screens.

If you want to reward your employees, strengthen your company's team spirit, or test your team's competitive spirit, karting corporate events are ideal. Karting corporate activities may also be used as a unique way to spice up a product launch or invite prospects or clients.

Prices vary depending on your age and the type of go-kart you ride, with a 15-minute ride on a 7HP kart for seven to 12-year-olds starting at BHD13. Adults will ride in a 22HP go-kart for 15 minutes for BHD24.

The reality is that go-karting is not only a fun activity for kids and adults, but it is also incredibly healthy. Every element of safety is taken into account, and today\'s karts and tracks are safer than ever, allowing kids to have the time of their lives on the track.

What is the best time to start karting?

Kart Racers Compete in a Unique Way. Kart racing can begin as early as the age of five. At this age, children are riding “Kid Karts,” as the name implies. A 50cc two-stroke engine, similar to that used on a weed wacker, is typically used in these machines.

When will the Bahrain Circuit open its doors?

The Bahrain International Karting Circuit opens to the general public:
From Sunday to Monday from 4:00 PM to 12:00 AM, and from Tuesday to Saturday from 10:00 AM to 12:00 AM.

Where can I stay near the Bahrain International Karting Circuit?

Related Activities for Karting in Bahrain